You ever heard the saying “a lady in the streets and a freak in the bed”? Do you think that there’s a fine line between a freaky spouse and fantasy? Is there a such thing as being too freaky?

I believe that there is a fine line in between the two. Sometimes fantasy should be just that “a fantasy”. Something that you should think about, but it should stay locked up in your thoughts. Not all fantasies are meant to be lived out. But….I believe when you are in a committed relationship, it’s your job to ensure that your partner is satisfied. My motto is “I’ll try ALMOST anything once” within reason. Don’t come at me with no crazy, off the wall shit. I’ve been discussing this topic with some of my male friends and what they said surprised me.

Most of them complained that their partner is not willing to do anything “outside of the box”. And by “outside of the box”, I mean trying different positions to using sex toys. I understand that not everyone is into toys, but not wanting to try new positions? I can’t say that I relate. I have one friend who’s partner only like missionary. But, if you know me you know that I like to play Devil’s Advocate. I had to ask these men, what do they do to make their women comfortable? Have they ever tried to do anything that their women suggested? And of course the answer is no. It’s called a lack of communication. We can’t expect out partners to give 100% and we’re giving 65%. We all need to be willing to please the other. Step outside of our comfort zones.

Back to crossing the fine line…..Seems that threesomes are a reoccurring topic in my conversations about sex. Is inviting a 3rd person into your bedroom going too far? Is this one of those fantasies that should stay hidden? According to an article in www.psychologytoday.com, 2 percent of women said they’d already had an MFM (and all had reported only having one such experience); by comparison, a full 10 percent of men said they’d had an FMF (and half of them reported having had more than one such experience, with a few reporting up to 20). Apparently people are actually having threesomes. Now whether or not they belong in the bedrooms of committed couples is another story. 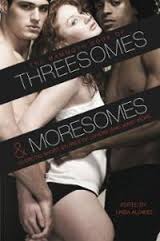 Is there something wrong with indulging in a fantasy or two with your mate? What’s wrong with playing with toys and putting in a lil work to please your partner. I’m not encouraging threesomes, but I am encouraging everyone to explore their sexual sides. Not just for your mate but for yourself. Too many of us are living sexually unfulfilled lives. Lives with no orgasms and no pleasure from oral sex. Can you imagine? Yeah me either. Whether or not you like doing things “outside of the box”, you should always push yourself. Be the best that you can be and enjoy life. Be honest with your partner. There’s always a compromise. Thank me later…..